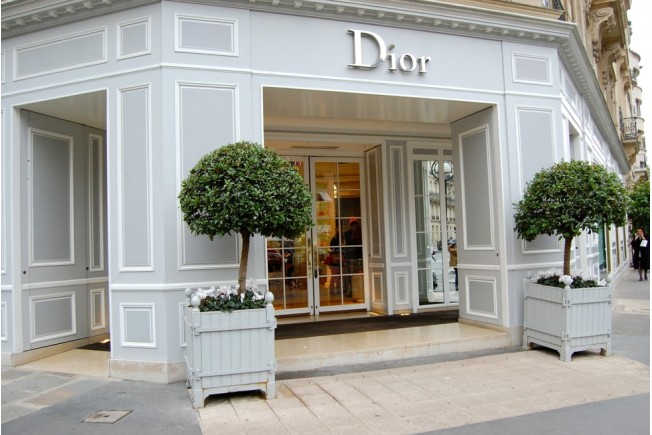 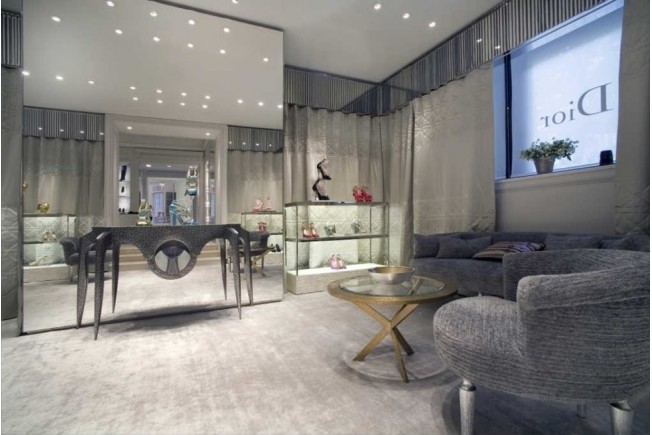 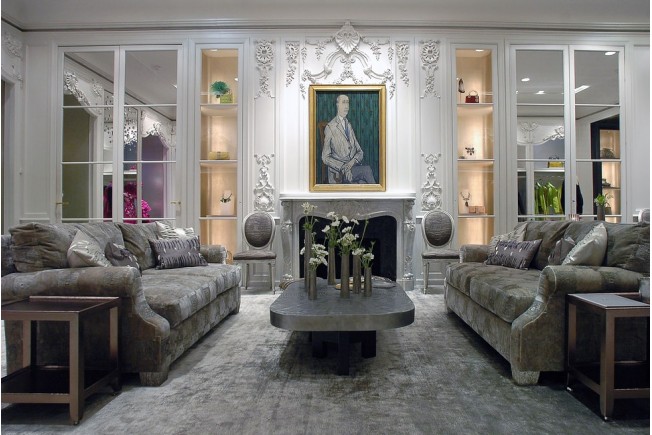 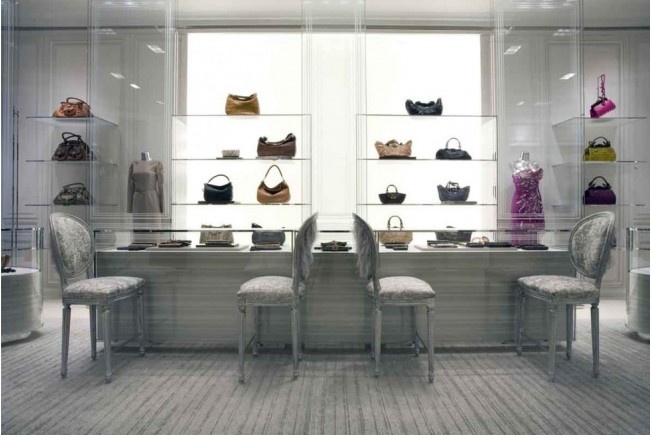 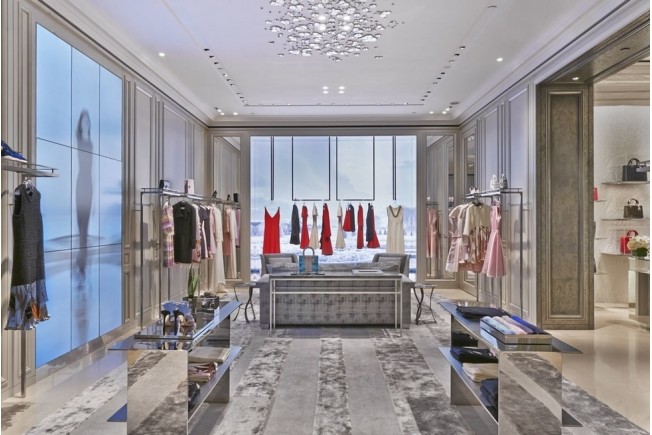 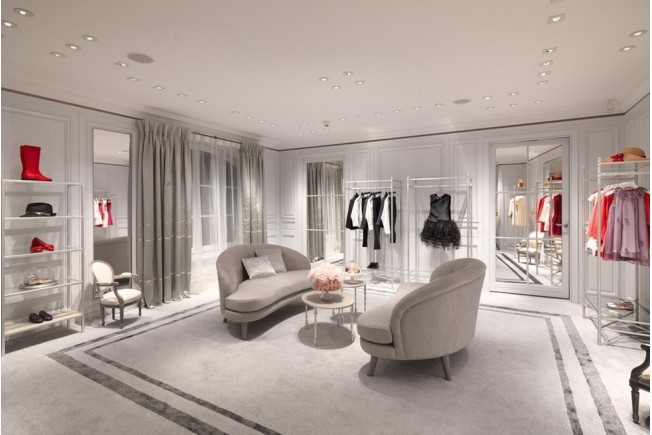 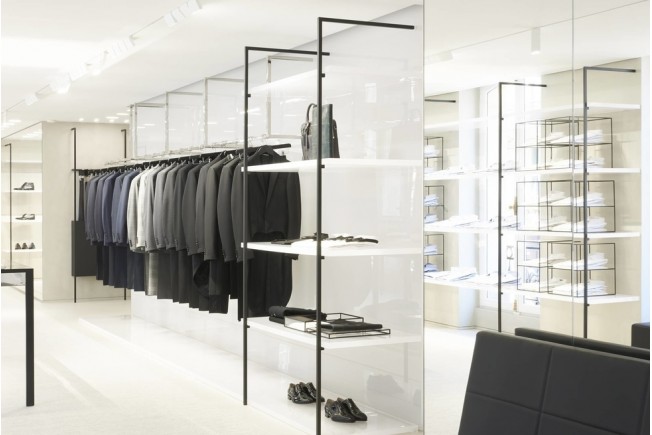 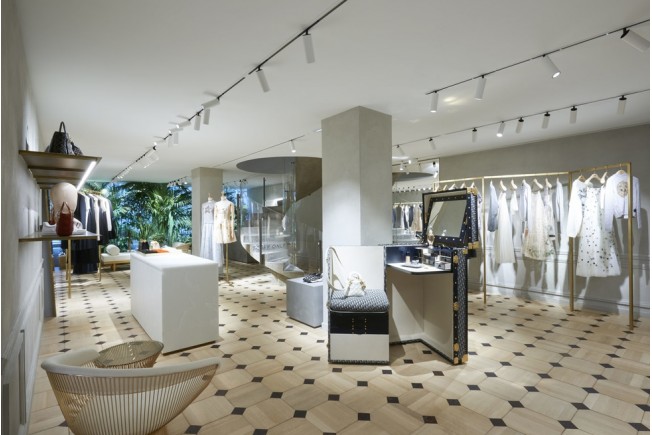 Dior, the luxurious Parisian botiques of the historic French Maison.

Dior is a prestigious luxury boutique founded in Paris in 1946. The founder Christian Dior - in collaboration with his friend and textile producer Marcel Boussac - opened the historic boutique in Avenue Montaigne. During the years, a lot of boutiques have been opened in the French capital and around the world.

Meters and meters of fabric were used to create romantic women's dresses. Christian Dior created silk and chiffon dresses which stood out the woman's silhouette: for the first time after the Second World War, the corset and the guêpière were proposed again. Indeed, Dior decided to renew lines and shapes, thus influencing the idea and the luxury fashion.

The "Corolle" silhouette, designed by Dior, had a very thin waist in a small jacket-bustier with three-quarter sleeves, with soft rounded shoulders pad, tall chest, combined with a midi flared and vaporous skirt with tulle. The look was then complemented by flat hats, long gloves and high heels.

The precious manufacturing and countless experiments of new fabrics and colors have always added more prestige to the Dior mansion. Clothing was made of lace or tricot, with black, white or pink pois. Dior was one of the first to use leopard prints on clothes or on satin and the fur as decoration of caps or sleeves.

Among the many celebrities who have worn Dior's clothes there are Gina Lollobrigida, Evita Peron, Windsor Duchess, Marguerite Carré and Raymonde Zehnacker and the Christian Dior muse Germaine "Mitza" Bricard.

After the founder's death many creative directors took place at the top of the company: Yves Saint Laurent, who launched the famous Trapezio collection and created the "Barbaresque" evening dress, Marc Bohan, who made some of the most important ceremony clothes with precious stones and embroideries for Grace Kelly, Jackie Kennedy, Princess Soraya, Elizabeth Taylor, Empress Farah Pahlavi and Maria Callas. Gianfranco Ferré revisited the military look of high uniform and launched the tailleur for affairs women, while with John Galliano the maison obtained the major success: during these years the stylist launched very successful handbags and fragrances. Today the creative director is Maria Grazia Chiuri, who wants to give homage to the tradition of the maison, starting exactly from the beginning, from Christian Dior.

Dior has opened a lot of boutiques during these years, but its headquarter is in Avenue Montaigne, because it was the first boutique opened in 1946. Majestic and impressive outside, the boutique inside has a very elegant and classic interior design, typical of historic houses of the French nobility, revisited in a modern way. The furnishings are of gray shades, velvet sofas, carpets, feathered chairs and iron tables, which in some cases recall the animalier print used by Christian Dior himself. In the living room there is the painting representing the draw of Christian Dior, positioned above a chimney over a wall with relief decorations and flanked by two showcases in which jewels are exposed.

The recently opened boutiques, especially those dedicated to the baby line, the man line and the pop-up store, have a more modern interior design, but always very elegant and luxurious.