"No man will make you feel as safe and secure as a cashmere coat and a pair of black glasses." That's how Coco Chanel summed up a great truth. And who can blame her? The importance of the right women's coat is absolutely not to be underestimated, not only to protect yourself, but also to avoid leaving the house looking like a burrito! From the tailored cuts of Bottega Veneta and Prada coats, to those with a strong personality by Loewe, passing through lines and volumes that wink at distant places and times like Jacquemus' coats, the mantra is: it is okay to keep warm, but do not hibernate the style! 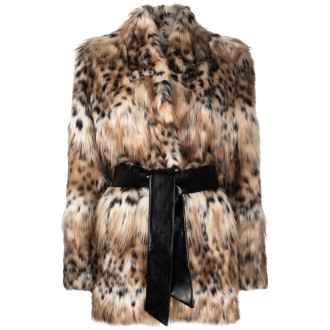 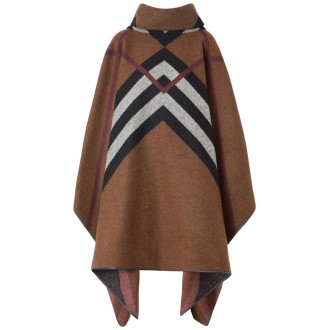 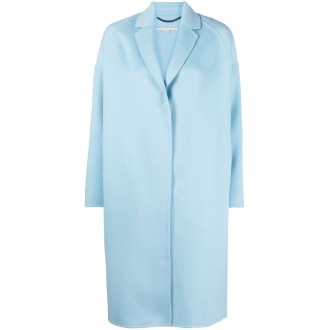 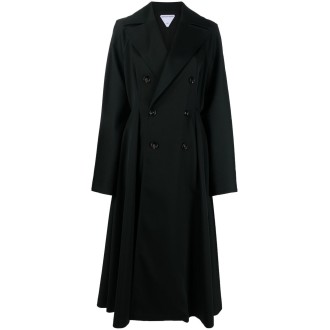 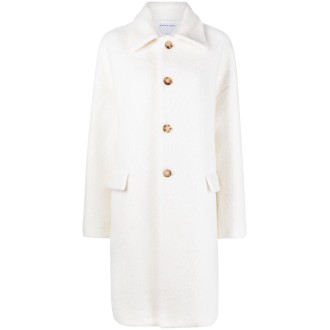 Here we are. Investing in the perfect coat for the winter is a vitally important issue that absolutely must not be taken lightly. It is, in fact, a garment that will be worn every day for several months, a sort of second skin at least for an entire season. Precisely for this reason, a small guide on the world of women's coats can become the best ally of each, so that it is easier to juggle the models and the latest trends, finding the right key to express yourself through this garment!

In fact, our rich selection is able to respond to any style emergency, ranging from a minimalist aesthetic typical of Jil Sander's coats, to the assumption of proportions and cuts that want to subvert the most classic canons, as happens instead in the proposals by Rick Owens. Here then, the time has come to be surprised by this wonderful universe!

Women's coats date back to the end of the seventeenth century and the beginning of the eighteenth century, when this type of overcoat went from being the head of the male wardrobe to becoming an integral part of the female one as an iconic garment with great charm. Initially, the coat was designed for horseback riding and as a matter of protection, this was long to the knee. Later it went gradually to shorten, so as to make the rides more agile.

Equipped with pragmatism and stylistic versatility, women's coats represent the perfect convergence of style, form and function. Today, this item of clothing takes on many different variations both to embrace every physical form and to meet everyone's tastes. And if black and gray represent the classic colors for a winter coat, more and more women are choosing to go against the tide and opt instead for sparkling and bold colors. In fact, the bright colors are a real panacea for the mood against the greyness of winter. Therefore, depending on the trends of the season, many fashion houses decide to give a twist to their collections by proposing, for example, neon colors like those we often encounter in MSGM coats.

Furthermore, since this garment is a real must-have, why should you have to choose between staying warm and being in? If you don't know what to do, opening the wardrobe of style icons is a good way to find inspiration, among timeless garments and others that have changed the history of fashion. So let yourself be inspired by all those actresses and style icons, who over the years have consecrated it as an element of elegance and seduction, the result will be guaranteed!

For example, Catherine Deneuve, a well-known French actress and muse of Yves Saint Laurent, was one of the first followers of the caban, a double-breasted coat with a wide collar and large buttons. The idea of this Saint Laurent women's coat was to elevate a garment linked to the world of sailors, elevating it to an elegant and sumptuous female garment. This navy-colored heavy wool women's overcoat, originally worn by both European and American navy soldiers, has now made its way to the catwalks of haute couture, as we can see by browsing the latest Jacquemus coat collections, which point to on raw wool and the blazer cut, or those by Chloè which instead offer the peacoat in a single-breasted version.

It is from the end of the 50s and the beginning of the 60s that the women's coat takes on the role of absolute protagonist especially in "Breakfast at Tiffany's", where an elegant Audrey Hepburn wears an orange coat designed by Hubert de Givenchy. But, even more beautiful are the models she wears in everyday life. Because the shots of the paparazzi manage to capture that innate elegance of her, which united her to another style icon of that period, the first lady Jacqueline Kennedy. Between flared knee-length, double-breasted and single-breasted cuts, Jackie O' often also sports cocoon-cut silhouettes with maxi buttons that have now become part of a more streetwear style as we see in the coats of MM6 Maison Margiela.

Another model of women's overcoat, which has experienced a happy escalation via the silver screen, is the women's trench coat. Its origins date back to the First World War, a trench warfare, in English for the note "trench". Although Mackintosh was the one who first made the raincoat, Thomas Burberry was instead the one who designed the trench coat as we know it today. In fact, he patented the gabardine fabric, a heavy cotton that did not allow water to enter, slipping over the tight, very fine woven meshes and equipped this model with a wide belt, in which it was possible to slip everyday objects such as grenades or blankets. Its evolution, from a purely military garment to an iconic piece of the women's wardrobe, starts in the 1940s, when the trench coat is transformed into a cult element of cinema noir thanks to Joan Fontaine's interpretation of "Rebecca, the first wife".

Today, alongside the more classic versions of Burberry trench coats, there are proposals made with increasingly innovative cuts and shades, which move away from the typical common imagination.

From here, there are many more contemporary brands that offer new variations of this garment, as happens for example in the Nanushka collections, where you can find vinyl with a glossy effect, perfect to show off even in more elegant situations.

Another coat, whose history is very similar to that of the trench coat, is the women's duffle coat. In fact, this model too has an important pedigree. It is named after General Bernard Law Montgomery and was a staple garment in the uniforms of the British Navy during the First World War. It will also become a cornerstone in the history of Burberry overcoats. Although numerous designers periodically propose different interpretations, as happens for the Dsquared2 duffle coat, the style of the past and the robustness remain unchanged. Its characteristics are: the purely straight cut and the unmistakable closures marked by frogs. From a guerrilla item, it then became a coat loved not only by actresses like Gwyneth Paltrow or singers like Lily Allen, but also an iconic symbol of the sweetest bear on television: Paddington.

Over the years, women's coats have undergone like all clothing items an evolution not only in cuts, but also in fabrics, especially as regards their processing. This is the case of the teddy coat by Max Mara, a brand that had the intuition to create an outerwear that evoked the softness typical of Trudy's soft toys. The secret of their success lies in a perfectly balanced blend of comfort and design, not to mention a good dose of softness that brings back sweet childhood memories. With its oversized lines, cocoon volumes and the construction entrusted to the softest fabrics, this model has managed to climb all the must-have rankings, so much so that it is sported by stars such as Hailey Baldwin Bieber, Julia Roberts and Heidi Klum.

On the other hand, the timeless variants of this garment are more rigorous and minimalist: its versions in single or double-breasted. Tagliatore women's coats, in their single-breasted variant, are the emblem of a classic and refined, almost essential taste, while the double-breasted ones by Balmain are ideal for those who love military style.

But why not let yourself be conquered also by playful and original details? The creations of the Chanel house are illuminated with lurex threads, while the Valentino coats are embellished with floral embroidery that will not let you go unnoticed! And to feel like a supermodel on the catwalk, you can always opt for the coats by Miu Miu, made with a hem so long that it looks like a very refined train.

Instead, if you want to opt for a timeless women's overcoat, the best choice is a cape or poncho, considered the most versatile of all, thanks to their lightness and the fact that they are less bulky. And why give up this type of comfort as a leitmotif of your wardrobe for the next cold season? Here everything is transformed and the silhouette disappears in a deconstructed warmth. Here the ponchos by Alexander McQueen envelop us in a punk bourgeoisie, while the capes by Etro bring the indie style to the maximum expression of fusion with glamor. The purest and most elegant variation of this coat is no less: in beige with fringes, as according to Fendi.

And in order not to feel ordinary in the coldest months of the year, other valid alternatives can be the women's coats by Gucci, which show off particular lengths and those '70s patterns so dear to the maison, or those of Philosophy by Lorenzo Serafini, which plays instead not only with bright tones, but also with such feminine cuts that make coats real dresses.

Not just practicality and functionality. Women's coats dictate a style that will come with some common denominators: width, structure and numerous details such as large lapels, contrasting buttons and visible stitching. At the same time, however, it is possible to witness an evolution of the same between cuts and volumes that push more and more towards their maximum as in the proposals of the Comme des Garçons coats, whose creations are inspired by the motto of Oscar Wilde: "O you are a work of art or you wear it ”.

So, if you are curious to find out how to fight the cold season in style, stay tuned here!